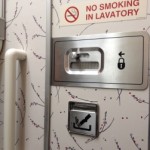 1.  The FAA requires ashtrays in aircraft toilets – Although smoking on aircraft has been banned on all U.S. domestic flights since 2000, the FAA requires that ashtrays continue to be fitted to lavatory doors due to the fire risk of someone illegally smoking and disposing the smoking materials. 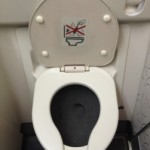 2.  Aircraft are not required to have lavatories – Airlines are not legally obligated to provide a lavatory on an aircraft. Something to think about when airlines are cutting costs… 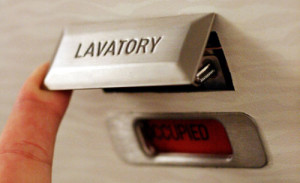 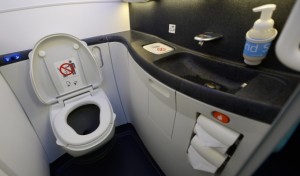 4.  The vacuum flush – Patented in 1975, most aircraft lavatories are equipped with the ‘vacuum flush’ opposed to the ‘chemical toilet blue water recirculate electric flush’ to mitigate the risk of corrosive waste spillover and be less odor-inducing. (The ‘vacuum flush’ system is also substantially lighter.) Photo Credit: Getty Images 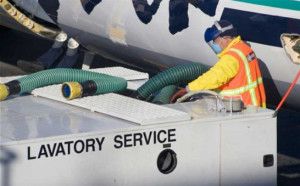 5.  The myth that aircraft toilets dump waste overboard when flushed is simply NOT true. Lavatory waste is contained in a holding tank until the aircraft lands. Manufacturers take great care to ensure this holding tank is secure. The apparatus to access the tank is located on the exterior of the plane and cannot be opened mid-flight. So many people believed that airplanes were dumping the bathroom waste inflight that the FAA had to release a fact sheet in 2005 titled, “It Came from the Sky: Human Waste, Blue Ice and Aviation” to dispel public perception that waste was falling from the sky.

• Pre-1930s: Empty buckets at the back of the planes used as toilets, or no toilet facilities were available at all.

*Information for this post was obtained via aviationweek.com and news.com.au.