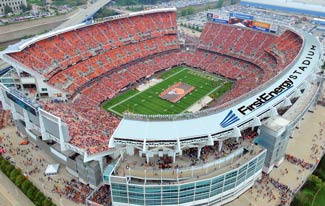 When you hear “football stadium”, what comes to mind? Chances are you thought of burgers, nachos, and beer.

Football stadium concession stands are always bustling. It’s very rare to see one without a long line in front of it. That being said, at any football stadium during a game, you’ll see at least 60,000 people munching on pizza, burgers, nachos, and soft pretzels and downing beer and other drinks. That’s great, but what happens afterward? Most likely 60,000 trips to the restroom.

No one really wants to think about it, but there is a high demand for restrooms at any given football stadium. One might not think twice upon seeing as many as 20 restrooms on each floor, but it’s actually a fascinating thing. How on earth could a football stadium that supports at least 60,000 people have a plumbing system that withstands tens of thousands of football fans (who are not usually kind to plumbing) going at the same time?

Football stadium plumbing codes are extremely strict. All the plumbing fixtures must all flow at once. The number of lavatories must be at least .06% of the maximum population at the stadium. For example, in a stadium of 60,000 people, there must be at least 3,600 lavatories throughout the entire stadium. The system must meet the flow demand at all times. The standards are extremely strict, especially because a slight plumbing problem can shut down the entire stadium for a long period of time, sometimes even years.

Football stadiums are built to be super durable, so naturally, their plumbing systems have to be “state-of-the-art” durable, as well. Every single piece of equipment has to be heavy-duty and vandal-resistant. Stadiums are large construction projects and can take anywhere between 2 and 4 years to complete. There is absolutely no room for error, so the team hired to design and install the plumbing has to be a highly proficient team with an impressive work history.

Once the plumbing system is set up, the plumbing team runs a test with tens of thousands of people to find problems within the system. There could be obstructions in drainage lines, dirty water coming out of the drains, or a ton of other problems. The system has to be completely foolproof before it opens to the public.

When the older stadiums were built a long time ago, the contractors didn’t pay too much attention to plumbing. A lot of problems have (or will) occurred because of that.

That’s why today, new stadiums test their plumbing system rigorously before opening to the public. Sometimes, they would even invite the general public to help them test their toilets. For example, in 1998, the M&T Bank Stadium in Baltimore invited thousands of volunteers to flush at least 1,000 toilets at the same time to ensure that the plumbing system still worked. The test turned out to be a success.

Plumbing is a big concern when building a football stadium. Next time you attend a game, be sure to set aside a moment to appreciate the skilled plumbers who made it possible for you to use the lavatories there.

– This article originally appeared on The Joist Blog and was written by Simon who is working for Fischer Plumbing in Seattle.