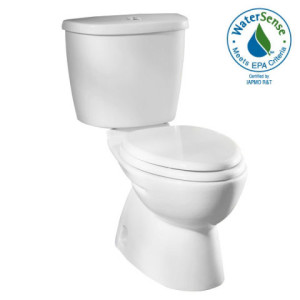 Dual flush toilets are the latest in water-conservation efforts, and have made the crossover from commercial to residential applications. Now, most well-known residential brands sell at least one dual flush model, including Kohler, American Standard, and Toto. Not only are there options, but the options are reasonably and competitively priced. Unfortunately, due to the vast differences in design, dual flush retrofit kits are not an effective option for homeowners who want the water savings, but don’t want to invest in a brand new toilet. So, if you’re looking for the vast water savings a dual flush toilet has to offer, you’re going to have to invest in the real deal this time.

Dual flush toilets handle solid and liquid waste differently from standard American-style toilets, giving the user a choice of flushes. It’s an interactive toilet design that helps conserve water and has quickly caught on in countries where water is in short supply, like Australia, and in areas where water supply and treatment facilities are older or overtaxed. Interest in low flow and dual flush toilets is on the rise in the United States, due in part to increased government regulation and the rising cost of water.

The Australians are credited with leading the way in the development of dual flush technology. In 1980, Bruce Thompson of Caroma Industries created the first two-button flushing system, a convenient method of manually selecting the water volume of each flush — a half flush for liquid waste and a full flush for solid waste — with the push of a button. Necessity was the driving force for the change. Traditional toilets used lots of water, a commodity that was in short supply on a continent that has erratic rainfall and experiences frequent and prolonged droughts.

How Much Water Does a Dual Flush Toilet Use?

Most modern dual flush toilets use less than a gallon of water to flush liquid waste and around 1.6 gallons to flush solid waste. This is a big saving over old toilet styles that used five gallons or more for each and every flush. Today, dual flush toilets are used widely in Australia, Europe and Asia, and they’re catching on in other areas as well. Increased environmental awareness, government regulation, the availability of monetary incentives, and the rising cost of water are making the changeover to dual flush and low flow toilet designs more attractive to U.S. consumers.

The way water is used to remove waste from the bowl has a lot to do with how much water is needed to get the job done. Standard toilets use siphoning action, a method that employs a siphoning tube, to evacuate waste. A high volume of water entering the toilet bowl when the toilet’s flushed fills the siphon tube and pulls the waste and water down the drain. When air enters the tube, the siphoning action stops. Dual flush toilets employ a larger trapway (the hole at the bottom of the bowl) and a wash-down flushing design that pushes waste down the drain. Because there’s no siphoning action involved, the system needs less water per flush, and the larger diameter trapway makes it easy for waste to exit the bowl. Combined with the savings from using only half-flushes for liquid waste, the dual flush toilet design can save up to 68% more water than a conventional low flow toilet.

In 1994, the National Energy Policy Act was signed into law, requiring toilets sold in the United States use no more than 1.6 gallons per flush. This mandate to conserve has given rise to a new generation of high efficiency toilets (HETs) that use technologies like pressure-assist, gravity flush and dual flush to whisk away waste using as little water as possible. Of the new technologies, the dual flush method has the advantage of intuitive flushing, where the operator can decide electively that less water is needed and use one gallon or less per flush instead of the 1.6 gallon maximum.

Although toilets purchased for new construction and retrofits must meet the new standards, millions of older water-guzzling toilets are still out there. As water and sewer costs keep rising, low flow toilets are becoming more attractive to the American consumer, and local and state governments are using rebates and tax incentives to encourage households to convert to these new technologies.

The advantages of low flow toilets in conserving water and reducing the demand on local water treatment facilities is pretty obvious. According to USA Today, the average person flushes the toilet five to eight times a day, and at a greedy five gallons a flush, the numbers start to add up quickly. According to the Environmental Protection Agency, completely eliminating old style, water guzzling toilets would save about 2 billion gallons of water each day in the United States. With a growing population, an aging water treatment infrastructure and the looming threat of global warming contributing to uncertain weather, water conservation will continue to be a big issue.